NECA's The Thing for January.

R.J. MacReady is a helicopter pilot for Outpost 31, an American research station in Antarctica. He is now a figure with NECA, with excellent detail and captures the exact likeness of Kurt Russell who stars in 'the Thing' from 1982. 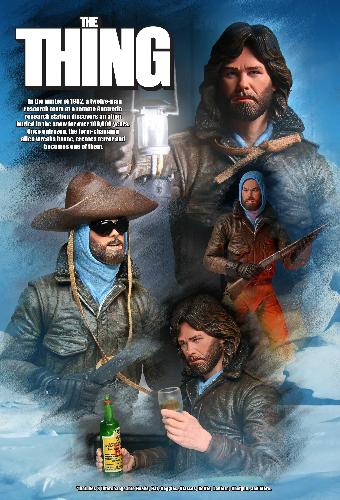 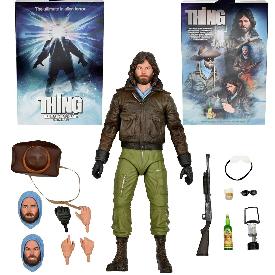 From The Thing, John Carpenter’s acclaimed slow-build horror film classic! MacReady is a member of a 12-man research team which finds something that’s been waiting for over 100,000 years in the Antarctic circle… something with the ability to become one of them. Featuring the official likeness of Kurt Russell, Ultimate Station Survival Macready stands approximately 7 inches tall and is fully articulated. Includes interchangeable heads and hands, flamethrower, fire effect, dynamite bundle, wire spool, petri dish, blood effect, revolver, and ice axe (NECA, 2021).

The film is a visual feast, with some of the best practical creature effects that have ever been put on film.

There had been years of licensing issues cropped up, making it difficult for collectible companies to properly license the film. NECA delighted horror fans with the announcement of an Ultimate R.J. MacReady Figure from The Thing. The figure, titled the “Outpost 31” version, is hopefully the first in a long line of releases from the film. So watch out at DragonGeeks for further releases from the classic 1982 version of the film!